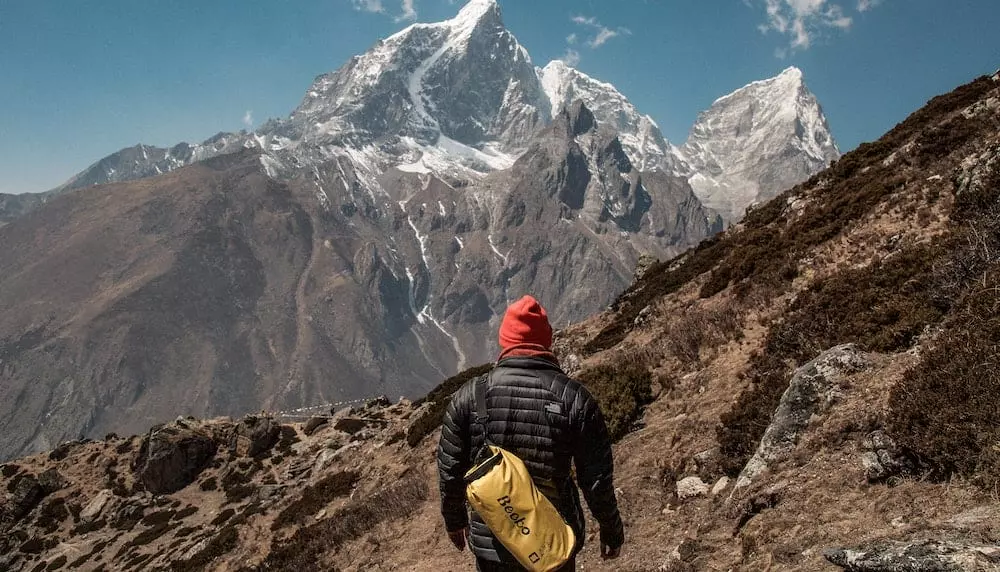 The American dream is all about wanting more:

We strive and work hard and climb this “ladder” because we are promised that at the top – we will find satisfaction and happiness.

This past week I was told a story about Mount Everest.

All of ya’ll will probably be familiar with the tallest mountain in the world, but what’s interesting about it is there is only one month in the entire year it’s somewhat safe to climb… though you still have a 4 percent chance of dying in an avalanche, mountain sickness, falling or being too exhausted to continue though there are deadlier mountains like Annapurna. What’s more, people pay over $40,000 for this endeavor!

Nevertheless, there are hundreds of frozen bodies near the peak as it would be too difficult to remove them as you climb through the “dead zone”. And at the top, there’s a line of people waiting that could take over an hour to get through which could result in a depletion of oxygen and make the long way down trickier (more people die going down than going up).

My point is, sometimes we can literally kill ourselves pursuing a goal or a dream to find happiness.

And in the end, once we have achieved something or attained our goal, is it worth it? Are we happy? Or do we just want more?

King Ahab, infamous for being one of the most evil kings the Israelites ever had, also thought something would make him happy, and in turn, only ensured the destruction of his entire household.

He is notable for going head-to-head with the prophet Elijah several times and also for being married to Queen Jezebel. In 1 Kings chapter 21, he is notorious for stealing a vineyard.

One day, probably on one of Ahab’s walks around the palace, he asked Naboth for his vineyard as they were neighbors. Ahab spoke to Naboth, saying, “Give me your vineyard so I can have it for a vegetable garden, since it is right next to my palace. I will give you a better vineyard in its place, or if you prefer, I will give you its value in silver.”

But Naboth said to Ahab, “As the Lord is my witness, I will never give my ancestors’ inheritance to you.”

In turn, Ahab returned home angry and resentful and acted like a toddler who was told ‘no’. He moped, he stayed in bed, and refused to eat. He wanted that vineyard and Naboth had the audacity to refuse a king!

So, his wife Jezebel realized something was amiss and asked Ahab what he was so upset about. Ahab explained the situation and his wife hatched a murderous plan.

Jezebel said to him, “Now, exercise your royal power over Israel. Get up, eat some food, and be happy. For I will give you the vineyard of Naboth the Jezreelite.”

Using Ahab’s name and seal, Jezebel ordered the elders in Naboth’s city to hire two ruffians to stone him to death – which they did.

This cleared the way for Ahab to take possession of Naboth’s vineyard.

Do you think Ahab was happy? I wonder if his vegetables were ripe and rich or if they tasted like ash in his mouth.

Either way, whatever he felt didn’t last long as God sent Elijah to the vineyard to tell him what the consequence of this action would be:

Elijah said to Ahab, “This is what the Lord says: ‘I am about to bring disaster on you and will eradicate your descendants: I will wipe out all of Ahab’s (house). Anyone who belongs to Ahab and dies in the city, the dogs will eat, and anyone who dies in the field, the birds will eat.’ As there was no one like Ahab, who devoted himself to do what was evil in the Lord’s sight, because his wife Jezebel incited him. He committed the most detestable acts by following idols.”

In many ways, Ahab was given much. He, as this story proves, could take anything he wanted as king over 10 tribes of Israel. Yet, with great power he was not very responsible, and his legacy is remembered by all the evil things he had accomplished.

I doubt Ahab set out to be evil. I think he just wanted to be happy. He wanted convenience, he wanted his life to be easy, and he wanted more. And by pursuing these goals, this Everest, he reaped destruction.

What is your Everest?

What are you pursuing that you think will make you happy?

Let me tell you that the only one who can bring you true contentment and peace is finding joy in Jesus Christ.

It’s such a simple answer and yet so hard to live by because we want more. And when we have accomplished or been given more, it’s not enough.

So, what mountain are you trying to climb today? Ask yourself, is it worth the cost?

In love and truth,
Melody

Copyright © 2021 by Melody Turner
All rights reserved. No part of this article may be reproduced or reprinted without written permission from MXTV.
[honest-maybe-relatable.com]
pic cred: unsplash.com

Pursuit of Happiness
Scroll to top